Mindful Leaders: What You Can Learn from Basketball (and Phil Jackson)! 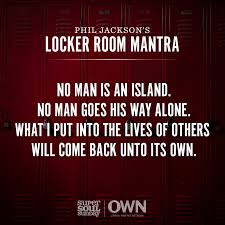 In this inspiring Super Soul conversation with Oprah, Phil Jackson, called the Zen Master and greatest basketball coach of all time, shares his journey as a seeker and how he used his background in Christian mysticism, Native American Rituals, and Zen Meditation as guiding principles for his work as a coach.

Don’t miss out – check out Phil Jackson’s SuperSoul podcast with Oprah or his book: Eleven Rings: The Soul of Success on Amazon!

Davidson and Goleman discuss their own experiences as lifelong meditators, their travels to ashrams and retreats all over the globe, and their meetings with yogis and monks – including the Dalai Lama. A must read for anyone interested in learning how meditation affects the body physically, mentally, and spiritually.

In addition to talking about how meditation leads to altered traits (what’s an altered trait? read on!), they review scientific studies done on meditation over the last fifty years, ancient practices of meditation, how the West tried to replicate them, the beginning steps to becoming an advanced meditator, and what deep meditation is.

Mindful Leaders: Why You Need to Cultivate Quiet and Stillness

CLICK HERE to read this short article by physicist Alan Lightman and learn more about why we owe it to ourselves (and children!) to spend quiet time alone each day. Lightman explains how we need slow down, build in time for reflection, privacy, silence, and work on our ability to sit quietly without external stimulation in order to cultivate our creative capabilities and healthy habits of mind. A short and inspiring read!